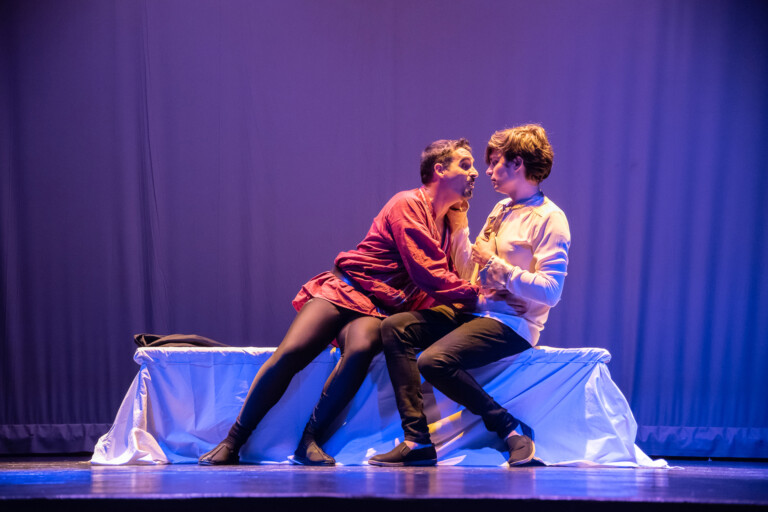 The Theatre section Urpes T was created in 2007. Since that year, every season the company conducts classes, interpretation workshops and prepares a play that premiers at the end of June or beginnings of July in a Barcelona theatre.

During the months of October to December the theatre group works on improvs, practices, acting training, etc. From January the director proposes a play that is rehearsed for 6 months before its premiere.

In addition to the weekly gatherings, during the months of April and May two intensive weekend rehearsals take place in a hostel near Barcelona with a cost between 30 € and 40 € per participant.

Since it is a group activity, we ask for a full commitment during the play rehearsal months with the goal of not affecting the rest of the group.

All the plays have either a character and a plot related to the LGTBI+ theme, or the play is an adaptation where the central plot is LGTBI+ themed.

Contact the section to reserve your free trial date and/or to get more information.

This website uses cookies to improve your experience while you navigate through the website. Out of these cookies, the cookies that are categorized as necessary are stored on your browser as they are essential for the working of basic functionalities of the website. We also use third-party cookies that help us analyze and understand how you use this website. These cookies will be stored in your browser only with your consent. You also have the option to opt-out of these cookies. But opting out of some of these cookies may have an effect on your browsing experience.
Necessary Always Enabled
Necessary cookies are absolutely essential for the website to function properly. This category only includes cookies that ensures basic functionalities and security features of the website. These cookies do not store any personal information.
Non-necessary
Any cookies that may not be particularly necessary for the website to function and is used specifically to collect user personal data via analytics, ads, other embedded contents are termed as non-necessary cookies. It is mandatory to procure user consent prior to running these cookies on your website.
SAVE & ACCEPT